Pope Francis: “Homosexuality is not a crime” 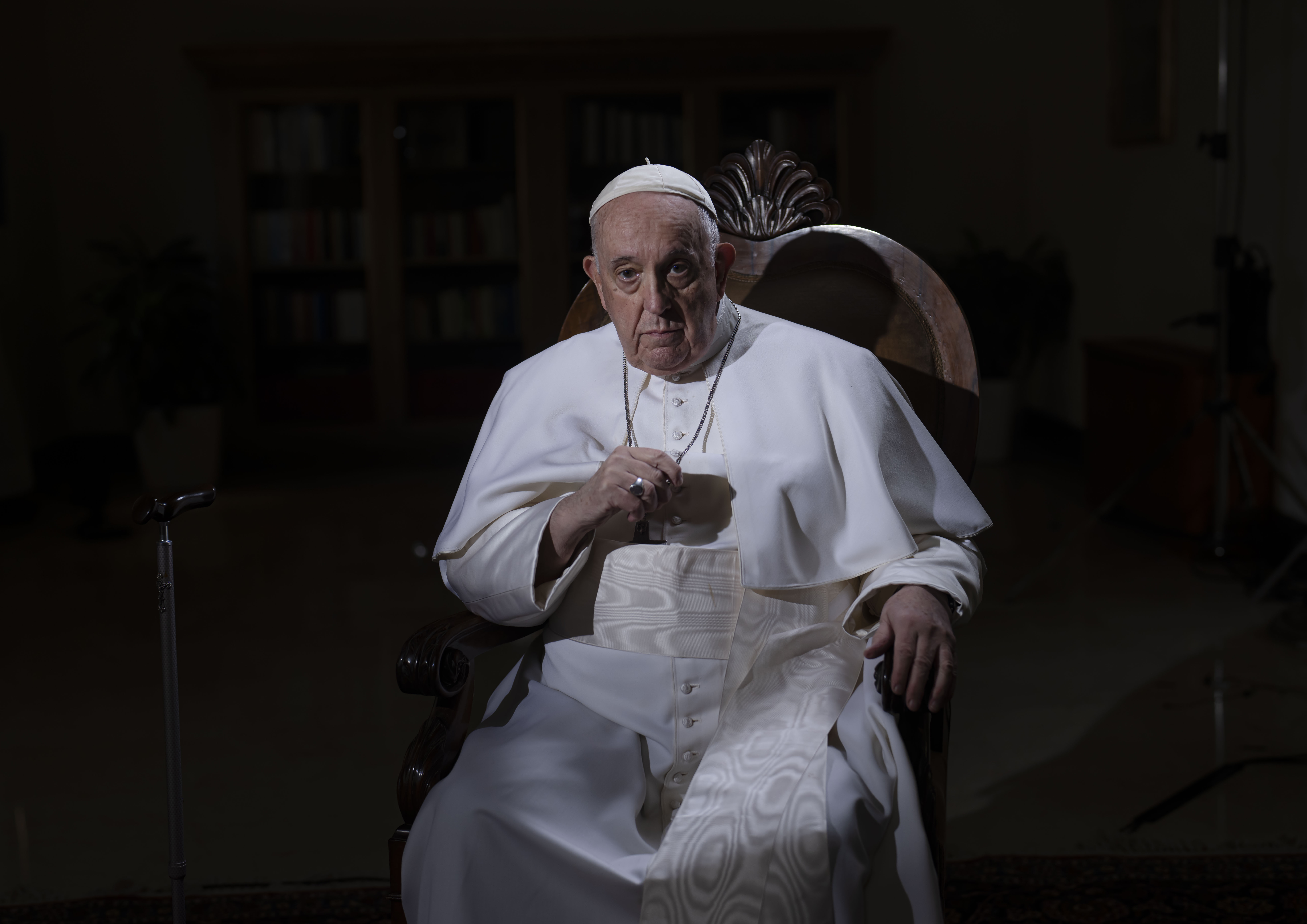 Pope Francis pauses during an interview with The Associated Press at the Vatican, Tuesday, Jan. 24, 2023. (AP Photo/Domenico Stinellis)

The Pope Francisco criticized the laws that criminalize the homosexuality as “unfair”, said that God loves all his children as they are and asked the catholic bishops who support those laws that welcome people LGBTQ in the church.

“Being homosexual is not a crime”, Francisco said during an interview on Tuesday with Associated Press. Francis acknowledged that Catholic bishops in some parts of the world support laws that criminalize homosexuality or discriminate against the community. LGBTQand referred to homosexuality as a “sin”. However, he attributed those attitudes to cultural contexts and said that bishops in particular must also go through a process of change to recognize the dignity of all.

“The bishop also has a conversion process,” he said, adding that they should show “tenderness, please, tenderness, as God has with each one of us.”

Some 67 countries or jurisdictions around the world criminalize consensual sexual relations between people of the same sex and 11 of them can or do apply the death penalty, according to The Human Dignity Trust, which works to end those laws. Experts point out that even when laws are not enforced, they contribute to harassment, stigma, and violence against LGBTQ people.

In USAmore than a dozen states still have laws against sodomy in their laws, despite a 2003 ruling by the Supreme Court which declared them unconstitutional. LGBTQ rights advocates say such outdated laws are being used to harass gay people and point to new laws like what is known as “Don’t Say Gay” in Floridawhich bans sexual orientation and gender identity education between kindergarten and third grade, as evidence of continued efforts to marginalize people LGBTQ.

United Nations has repeatedly called for laws criminalizing homosexuality to be dropped, claiming they violate the rights to privacy and freedom from discrimination, as well as breaching those countries’ obligations under international law to protect the human rights of all world, regardless of their sexual orientation or gender identity.

Francis declared those rules “unfair” and said the Catholic Church can and should work to end them. “They have to, they have to,” he said.

Francis cited the catechism of the Catholic Church to point out that homosexuals must be received and respected, and must not be marginalized or discriminated against.

“We are all children of God and God loves us as we are and with the strength that each one of us fights for our dignity,” said Francisco, who spoke with PA in the Vatican hotel where he lives.

Those laws are common in Africa and the Middle East and date back to the British colonial era or are inspired by Islamic law. Some Catholic bishops have strongly defended them as consistent with the doctrine of Vaticanwhich views homosexual activity as “intrinsically disordered”, while others have called for its repeal as a violation of fundamental human dignity. 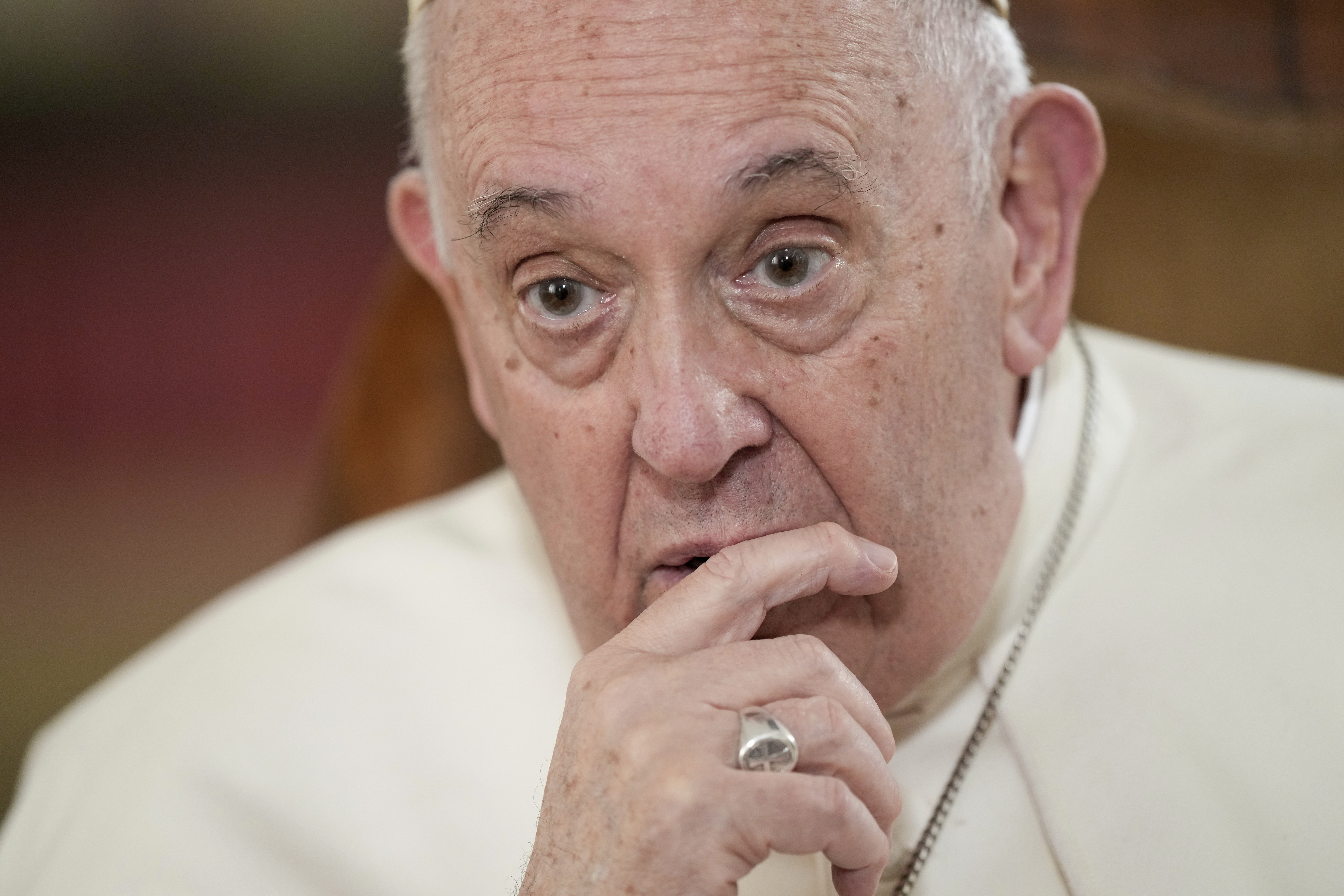 Pope Francis speaks during an interview with The Associated Press at the Vatican, Tuesday, Jan. 24, 2023. (AP Photo/Andrew Medichini)

In 2019, Francis was expected to publish a statement against the criminalization of homosexuality during a meeting with human rights groups that investigated the effects of these norms and so-called “conversion therapies.”

In the end, the pope did not meet with the groups, who instead met with the Vatican’s number two, who reaffirmed “the dignity of every human person and against any form of violence.”

Francis said Tuesday that when it comes to homosexuality, a distinction must be made between crime and sin.

“Being homosexual is not a crime”, said. “It is not a crime. Yes, but it’s a sin. Well, first let’s distinguish sin from crime. But lack of charity towards one’s neighbor is also a sin.

Catholic teaching indicates that while homosexuals should be treated with respect, homosexual acts are “intrinsically disordered.” Francis has not changed that position, although he has made outreach to the LGBTQ community one of the hallmarks of his papacy.

Since his famous 2013 statement “who am I to judge?” when asked about a priest who according to reports was gayFrancis has continued to address himself repeatedly and publicly to the gay and trans communities. As Archbishop of Buenos Aires He was in favor of offering legal protections to same-sex couples as an alternative to supporting gay marriage, which is prohibited by Catholic doctrine.

Despite this approach, Francisco was criticized by the Catholic community LGBTQ by a 2021 decree from the Vatican’s office of doctrine that the Church cannot bless same-sex unions “because God cannot bless sin.”

In 2008, the Vatican declined to sign a United Nations declaration calling for the decriminalization of homosexuality, complaining that the text went beyond the original draft and also included bits about “sexual orientation” and “gender identity” that seemed problematic. In a statement at the time, the Vatican urged countries to avoid “unfair discrimination” against homosexuals and end sanctions against them.

In the interview, the Pope pointed out that “we must walk with patience” in China and who sees the ongoing dialogue with Beijing as the guide in their efforts to safeguard their faithful, who are a small minority in the Asian country.

Associated Press asked what will be next in the diplomatic rapprochement between Beijing and the Vatican.

“We are taking steps,” Francisco said. “Each case (of bishop nomination) is looked at with a magnifying glass.” The main thing, he added, is that “dialogue is not broken.”

“Sometimes they are a bit closed, sometimes not,” he said of the Chinese authorities.

The pope did not directly respond to a question about how the Vatican’s relationship with the Vatican affects that dialogue. taiwan. The Holy See is one of the few states that maintains formal ties with Taiwan rather than China.

Francis has come under fire from more conservative factions of the Catholic Church over a 2018 agreement with Beijing over the appointment of bishops in China, given that the communist authorities they have imprisoned priests on occasion. One of the harshest critics of him is the cardinal Joseph Zenbishop emeritus of Hong Kong. 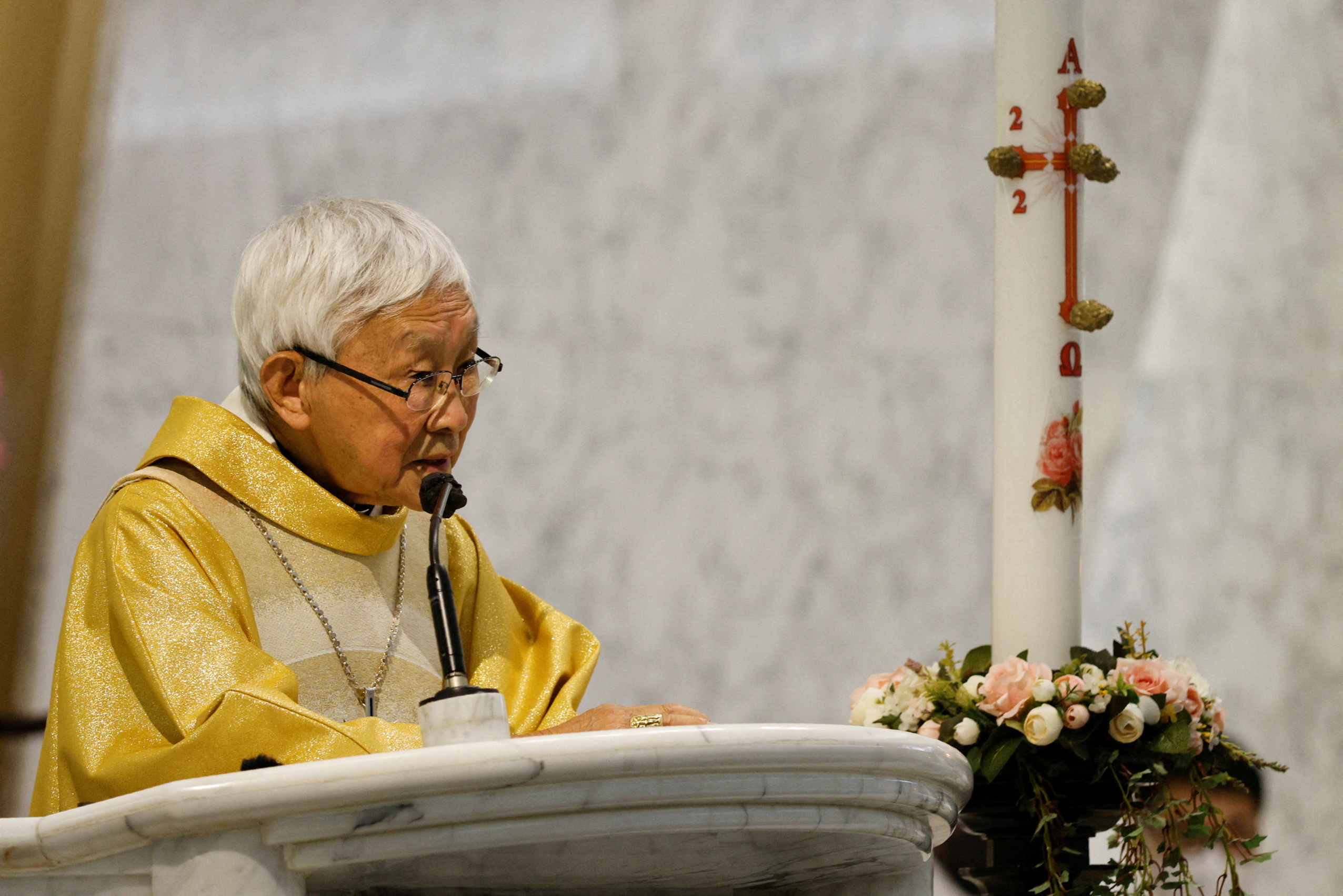 In the interview, Francisco described Zen, 91, as “a charming old man”. He recalled how, when the cardinal traveled to Rome this month for the funeral of Pope Benedict XVI, the pontiff had invited him to the vatican hotel where he lives. Before the pope’s private study is a statue showing Our Lady of She Shan. When the cardinal saw her, Francis said, “he began to cry like a child.”

Zen was detained last year after clashing with Hong Kong authorities over his involvement in a now-silenced pro-democracy movement.

PA he also asked the 86-year-old pontiff about his health.

“I’m healthy. For the age that I am, I am normal. I can die tomorrow But come on, it’s under control,” he replied with his usual irony. “And I always ask for grace, that the Lord give me a sense of humor.”

He also indicated that the diverticulosis, pockets that form in the wall of the intestine, had “returned.” In 2021 Francis had 33 centimeters of his large intestine removed for what the Vatican described as inflation caused by a colon narrowing.

He added that he has a small broken knee by a fall had been cured without surgery, after a laser treatment and magnetotherapy.

Regarding his future, after the death of the pope Benedict XVIhis predecessor and who in 2013 became the first pontiff to resign in 600 years, Francis was asked if rules were needed to future retirements.

Pope Francis said it has not even occurred to him to introduce norms to regulate future papal resignations, and that he will continue as long as he can as bishop of rome Despite a wave of criticism from some cardinals and bishops of high rank.

“After some more experience, there could be more regularization or more regulation,” he said. “But at the moment it didn’t occur to me.”

In the short term, Francis stressed his role as “bishop of Rome” in contrast to the pope figure and said his plans were to “continue to be a bishop, bishop of Rome and in communion with all the bishops of the world.” He indicated that he wanted to eliminate the concept of the papacy as a “court.” 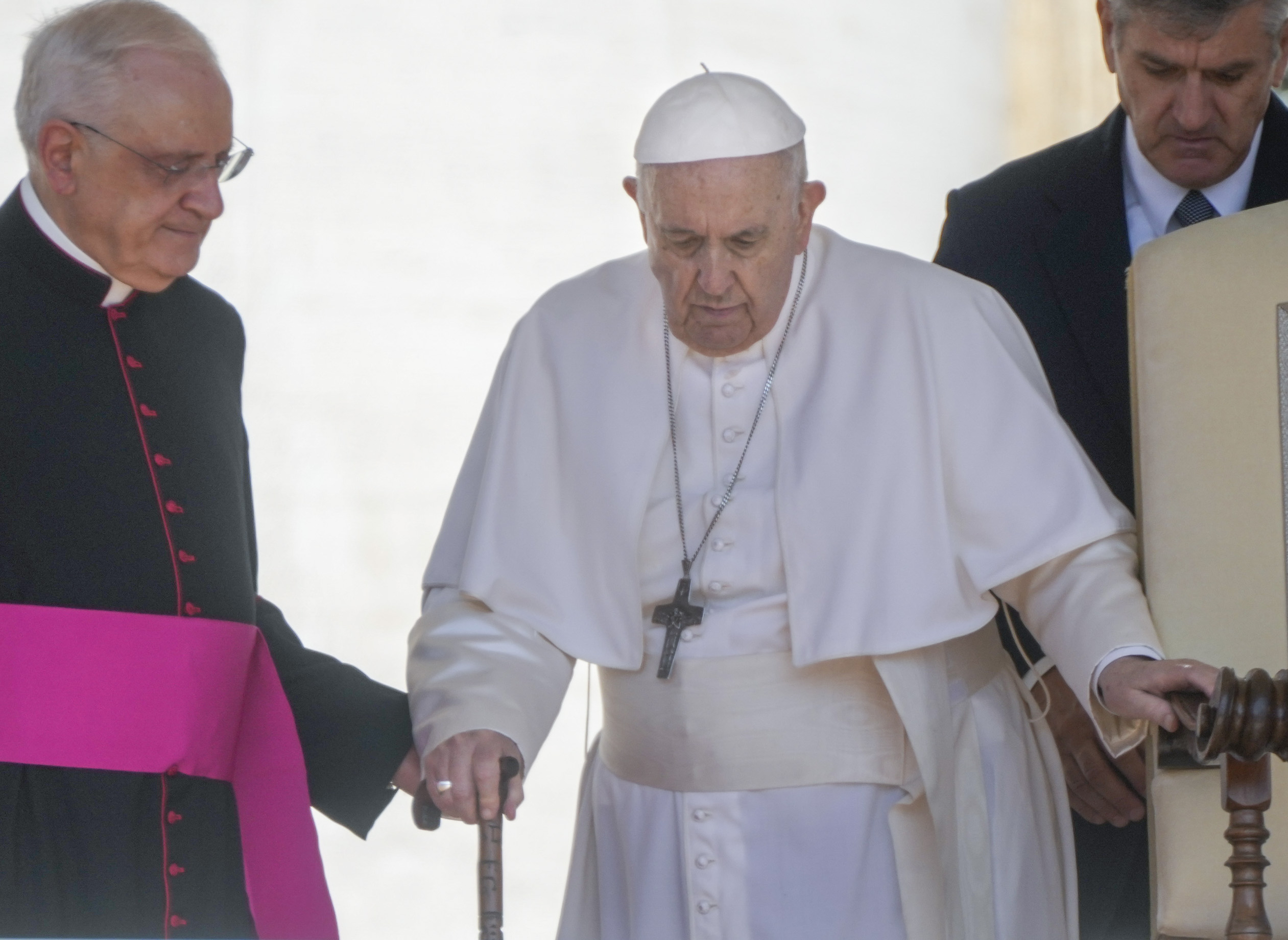 Pope Francis is assisted by Monsignor Leonardo Sapienza, left, as he walks with a cane to his general audience in the Vatican’s St. Peter’s Square (AP Photo/Gregorio Borgia, File)

The pope also addressed the criticism from cardinals and bishops known in the weeks since Benedict’s death, something he described as uncomfortable, “like hives, which bothers a little”, but which he prefers to keep silent.

“One prefers there not to be (criticism). For peace of mind, ”she pointed out. “But I prefer that they do them, because that means that there is freedom to speak.”

“If it is not like that, a dictatorship of the distance is engendered, which I call it, where the emperor is there and nobody can say anything to him. No, let them say, because the company, the criticism, helps to grow and things to go well, ”he added.

Francis acknowledged Pell’s criticism but praised him nonetheless for being his “right hand” in reforming Vatican finances and his first finance minister.

“They say that in the end he criticized me. Well, he has the right, criticism is a human right,” Francisco commented. “A great guy. Great”.

(With information from AP)

Pope Francis withdrew the clerical state of a French religious accused of sexual assault
Pope Francis spoke in favor of introducing psychological itineraries in seminaries to prevent abuse
Pope Francis spoke about the protests in Peru: “No to violence, wherever it comes from”