Very upset against the international model Irina Shayk, Anthony Delon humiliates her in the middle of Fashion Week…

Currently, the fashion planet is in turmoil! This Monday, January 23, 2023, countless Paris Fashion Week shows were unveiled to the general public. That of the Schiaparelli brand was particularly eagerly awaited by fashionistas. Many stars have made the trip to attend, like the artist Doja Cat or Kylie Jenner. The businesswoman caught all eyes in a black bodycon dress. In addition, a huge lion’s head was grafted on the right side of his outfit.

An astonishing trompe-l’oeil which had its small effect. A creation signed Daniel Roseberry, the artistic director of Schiaparelli. On the catwalk, Irina Shayk has also unleashed passions by wearing the same look as Kylie Jenner. Other dresses similar to hers were also shown to onlookers. For example, Naomi Campbell adorned herself with a set that was reminiscent of the fur of a wolf and that of a snow leopard for Shalom Harlow.

The show sparked a lot of reactions in the media and social networks. Taken aback about this, Anthony Delon also took to his Instagram story to tackle Irina Shayk’s flagship outfit… And that of Kylie Jenner. “Very bad. Stop glorifying hunting trophies”, was annoyed the son of Alain Delon by relaying a snapshot of the mother of Léa de Seine. But he is not the only one to have been shocked by the parade.

Like him on the Web, other Internet users have cried foul: “Even if the lion’s head is fake (well I imagine) you have to stop excusing their bad taste in fashions there”, “As much as I am open-minded, but I admit to having been very uncomfortable in front of certain dresses from the show”, “It’s awful! “, “Always more… I find Irina Shayk’s dress super creepy”, “In very bad taste… Already that the stylists have decided to take a step forward by betting on fake fur, Daniel Rosebery shoots himself a bullet in the foot with that ». It remains to be seen whether the fashion house will be sensitive to returns… To be continued 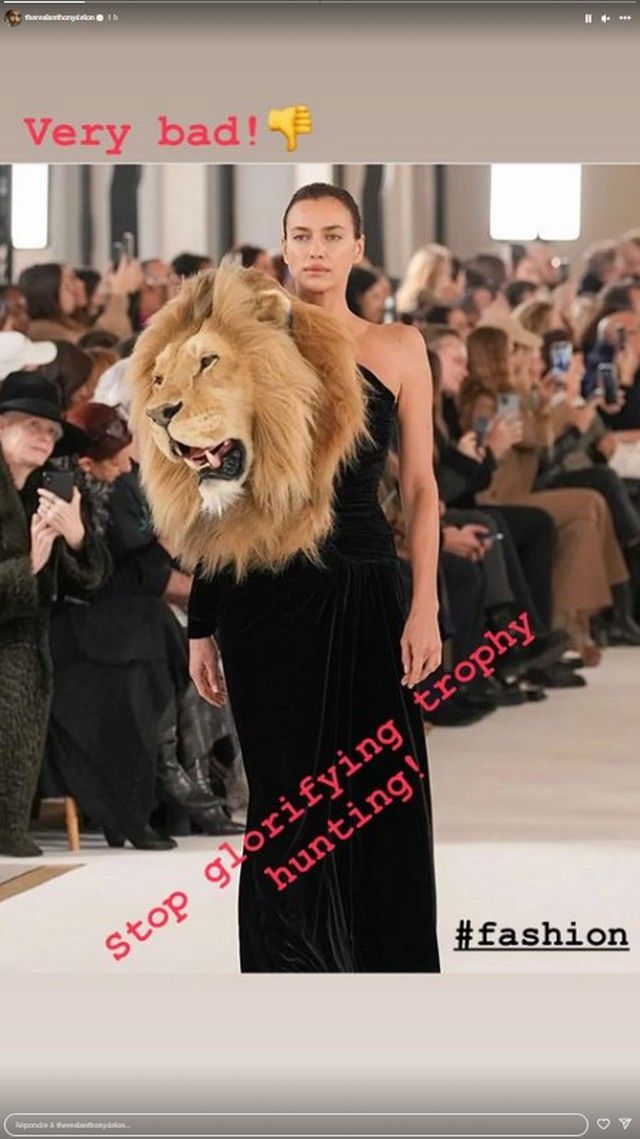 see also: “What do you see?” : Lively explanation between Anthony and Alain Delon on Christmas Day!