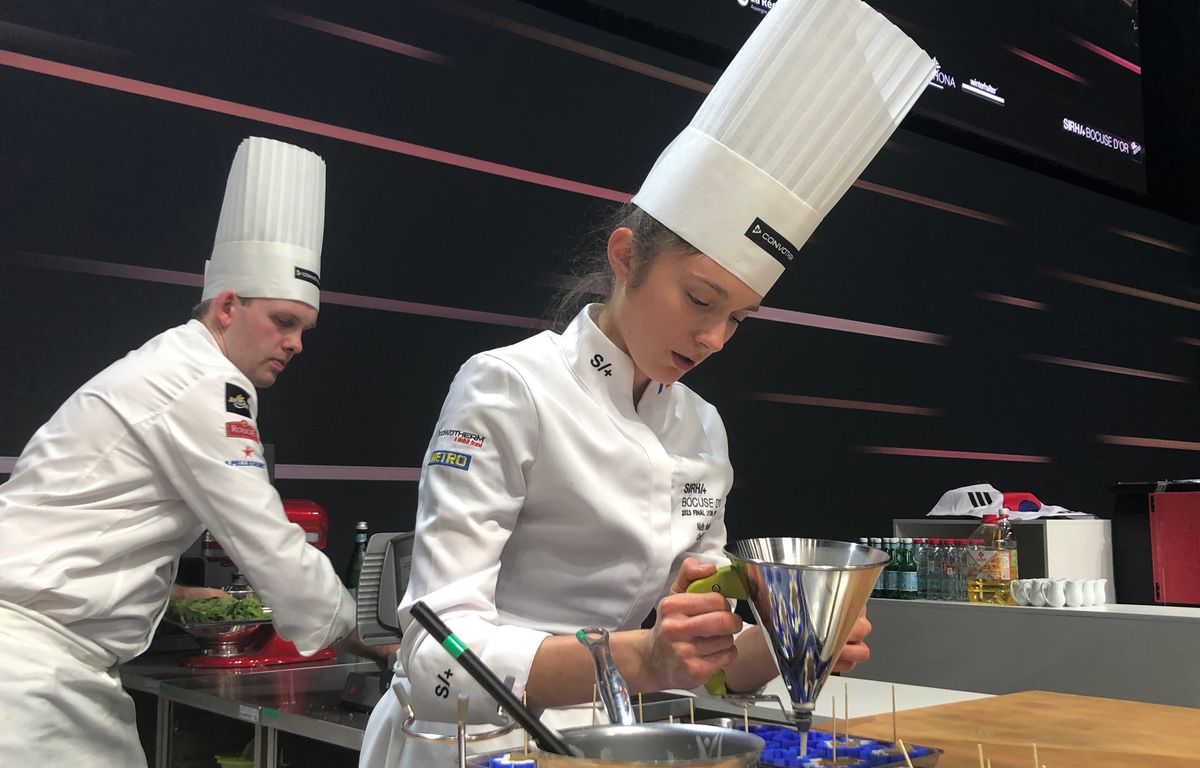 On the screen, the countdown is started. Ten seconds left to finish. 2:09 p.m.: this time, the timer stops. First smiles on the face, hitherto very concentrated, of Naïs Pirollet. The satisfaction of a job well done. Surpassing oneself. The culmination of eighteen months of hard work. The young chef from Lyon, who represents France at the Bocuse d’Or, has finished her ordeal. She embraces her teams, congratulates her brigade. Now we will have to wait. Wait for the jury to taste their dishes, wait for the other competitors to pass, each in turn. And wait to find out who will succeed his mentor, Davy Tissot, winner of the previous edition and president of the jury this year.

“This morning, I had a little tear in my eye”, confesses the interested party, overcome by emotion when entering the stage, before the start of the competition. Naïs “left the same box” in the kitchen and “at the same time” as him, a year and a half ago. Pure coincidence? In the game of predictions, the man does not risk himself, as “there are big teams” and a “beautiful audience of champions”.

Sublimate the squash for children

Each candidate had five and a half hours to create a squash-based “children’s menu” – from appetizer to dessert – and a platter in which monkfish was queen. Seemingly simple products? “Simplicity is the hardest thing to do,” smiles Davy Tissot. The challenge is to manage to make something elegant out of it. The visual will play, the colors too. But, on this first theme, the whole difficulty is to find the right measure. Knowing how to touch the hearts of children without being too childish”.

At his side, the three-starred chef Dominique Crenn, also honorary president of the jury, tastes the first plates. The criteria for winning? “Working on emotion. I want dishes that take me into the universe of the candidates, she replies. If they touch me, the candidate has already won…”

Visibly touched when savoring Naïs Pirollet’s second course, chef Régis Marcon stammered: “It’s wonderful… It’s a gem,” he exclaims to the audience. The platter is tempting: poached monkfish tail on the bone, land and sea stuffing, cream of scallops linked to coral accompanied by creamy pumpkin, pointed and curly cabbage and creamy cauliflower. Without forgetting the blond peas from the Planèze in yellow wine and its saffron mussels. “We immediately understand that it was a woman who made it, it’s so delicate, adds the chef. It’s incredible “.

But the young woman distinguished herself even more on the first test which, at the time of the prize list, allowed her to win the prize for the best “children’s menu”. His lollipop made with a crunchy squash croissant, tangy apple, condimented honeycomb and squash praline immediately won over the greatest chefs. As well as his soft-boiled egg and bechamel accompanied by a nutmeg squash velouté. And her dessert: a meringue top topped with milky pumpkin mousse. “We go from surprise to surprise on this plate, admires a chef. It’s very risky and I like taking risks”.

Paid bet. “This children’s menu was a lot of work, doubt, misunderstanding. I’m happy to know that we hit it off and that we aimed where it needed to be, ”says Naïs Pirollet all smiles, happy with her career. And to conclude: “There is no sadness, it is a victory to have come this far”.

Big Brother: Santiago Del Moro made the participants believe that Alfa was leaving the house

Bribes, accomplices and Barbie: the revelations of El Grande in the trial against García Luna

Big Brother: Santiago Del Moro made the participants believe that Alfa was leaving the house

Bribes, accomplices and Barbie: the revelations of El Grande in the trial against García Luna