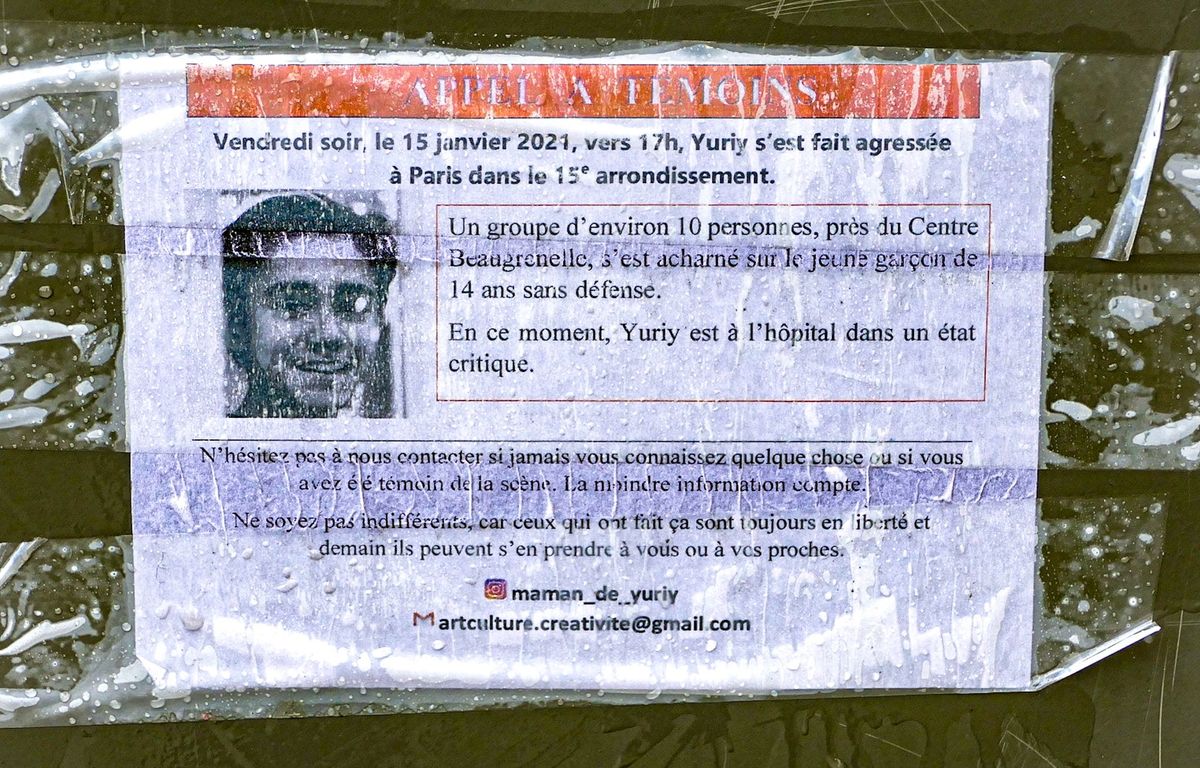 On January 15, 2021, Yuriy, a schoolboy who was about to celebrate his 15th birthday, was taken to Necker hospital in serious condition after being beaten on the Beaugrenelle slab, in the 15th arrondissement of Paris, by a dozen people. Two years after this violent attack, four minors will appear before the juvenile court ruling in criminal matters, from February 1 to 3, learns 20 minutes from judicial sources. One of them will be tried for “attempted murder”, two others for “complicity in attempted murder”, and the last for “criminal conspiracy to commit a crime”.

The four defendants being all under the age of 16 at the time of the events, the trial could be held behind closed doors. Contacted by 20 minutes, Me Laura David, who represents the teenager returned for “attempted murder”, did not wish to speak before the hearing. His client, who was 15 at the time, admitted in police custody to having kicked Yuriy in the face, but claimed not to have used the hammer he had in his possession that day to hit him. He also always assured the investigating judges that he had no intention of killing the victim.

An audience approached with “serenity”

“My client completely denies the facts which are not, as far as he is concerned, factually established”, declared to us last November Me Frédéric Landon, whose client, who was 15 years old at the time of the facts, is dismissed for “complicity in attempted murder”. Justice accuses him of having warned his friends of the presence, in the neighborhood, of other young people from a rival gang. On the other hand, the exploitation of the images of the surveillance cameras confirmed that he did not strike the victim although he was in the neighborhood at the time of the facts. “My client was not there, underlined Mr. Landon. At worst, he may have warned some of the youngsters he knew about the arrival of another gang, but that was it. »

The teenager defended by Me Dylan Slama did not hit Yuriy. On the other hand, the investigations showed that he was present at the scene of the attack and that he witnessed the surge of violence suffered by the victim without intervening. He is also fired for complicity in attempted murder. “My client has a more marginal role, very very peripheral. I am happy that it is coming to an end for him and that he can, I hope, return to a normal life following this hearing, which we approach with serenity, ”declares the lawyer to 20 minutes.

Another trial before the assizes

The fourth teenager tried by the criminal juvenile court is accused of having taken “an active part in the organization of the violence which was then to be committed on the victim in a context of revenge”, indicate the investigating judges in their order reference, consulted by 20 minutes. Aged 14 at the material time, he will appear for “criminal conspiracy to commit a crime”. His lawyer, Me Julien Fresnault, did not wish to make a statement before the hearing.

In addition, eight other young boys, who were aged 16 or more at the time, will be sent to the Assize Court for Minors. The hearing date has not yet been set.

Finally, another teenager, who was sent back to the Assize Court for “participation in a criminal association”, benefited from a dismissal pronounced on December 15 by the investigating chamber of the Court of call from Paris. The young man, defended by Mes Caroline Girard and Marianne Abgrall, had made the trip on the slab with crutches to “defend” himself, he explained during the investigation. But when he arrived, the firefighters were already there. He then received a call “telling him that it was over” and that he had to leave. He had been exonerated by the other suspects.

“A context of rivalry” between gangs

In their order of indictment, the investigating judges consider that “the facts are part of a context of rivalry between young individuals, residents of the 15th arrondissement of Paris, forming the RD4 band on the one hand, and that of the plateau of Vanves on the other hand”. “It is established that the aggression of Yuriy […] was an act of revenge in response to the aggression suffered “five days earlier by the half-brother and cousin of two of the defendants, according to the magistrates, who recall that the victim had a screwdriver in his poached. Yuriy had asked witnesses who had come to help him to remove it and hide it in a flower box.

Contacted by 20 minutesYuriy’s lawyer, Me Francis Szpiner, did not respond to our requests.

that homophobic message he received on Snapchat…

Gastón Pauls dedicated a tender message to his ex-partner Agustina Cherri, after the birth of his son Bono Vera: “The family is growing”

that homophobic message he received on Snapchat…