The Bucaramanga-Rionegro highway, which leads to the Caribbean Coast, is blocked by protests 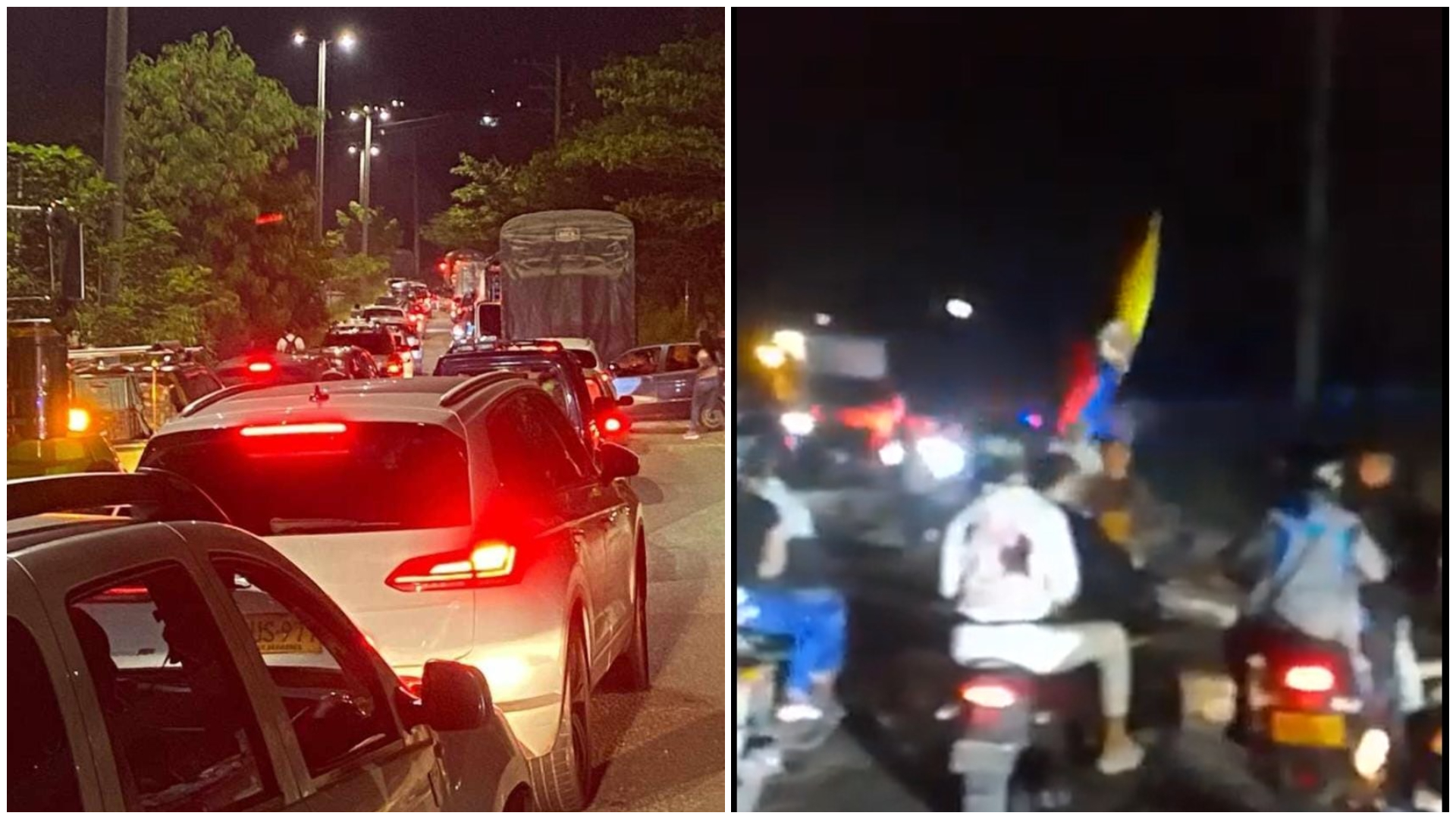 The poor state of the road that connects Bucaramanga with the municipality of Rionegro, in Santander, caused that, since the early hours of Monday, January 23, several citizens blocked that section to demand that the authorities take action in that sector and advance, as soon as possible, the paving of the highway in order to have better mobility .

Cars, motorcycles and other vehicles have not been able to move towards the Caribbean coast because with rubble, sticks and other elements, the protesters have closed the road and demand that the Financiera de Desarrollo Territorial (Findeter), which is responsible for improving road quality, fix these inconveniences as soon as possible.

The protesters also ask the Bucaramanga Mayor’s Office, hand in hand with Findeter, to see how they solve the issue; They assure that the poor condition of the road network does not allow them to move normally and that it is even responsible for traffic accidents when drivers try to avoid holes and other anomalies in the pavement. 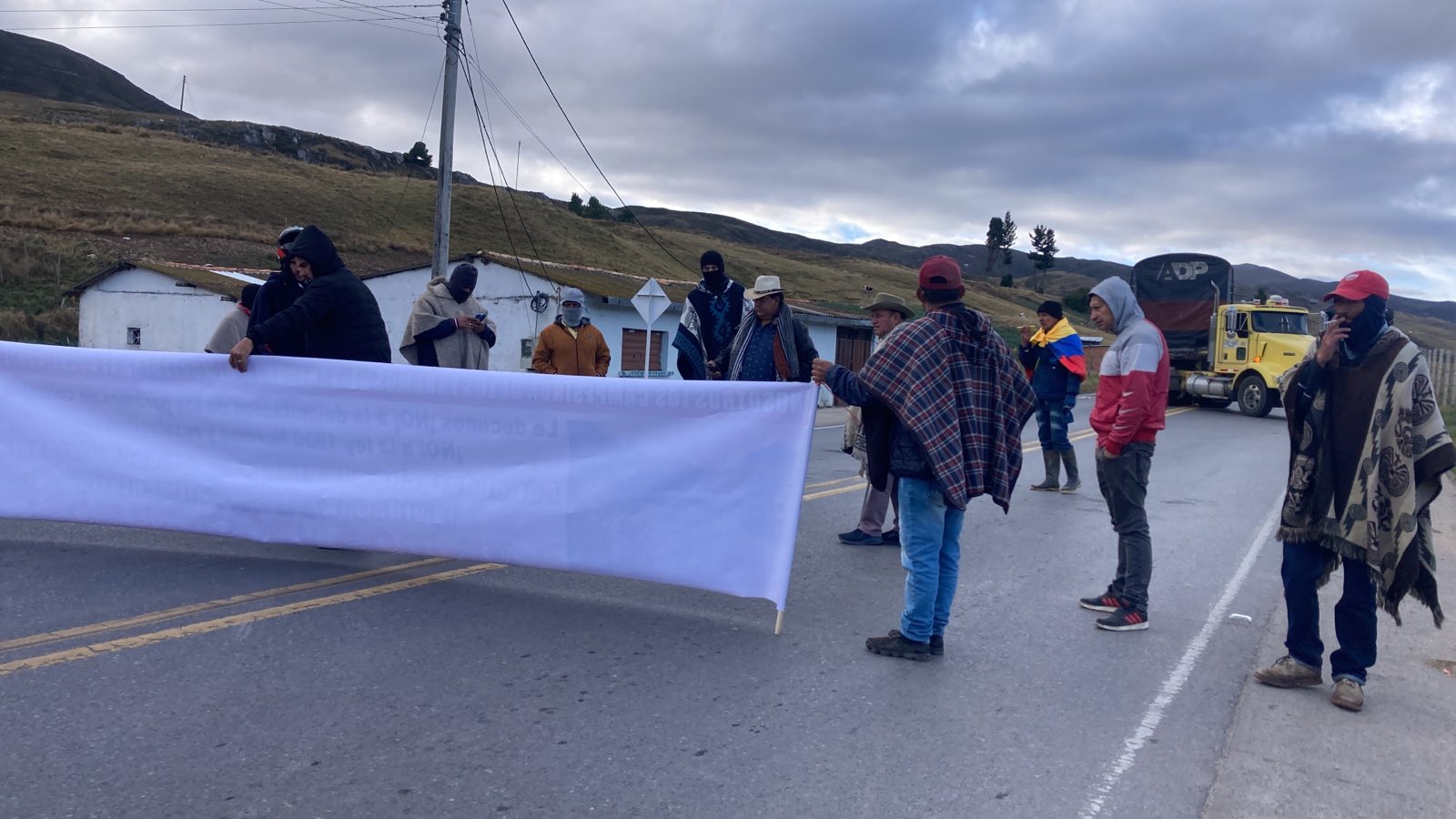 The protest on the Rionegro highway occurred after the peasant strike between the Bucaramanga-San Gil highway. Archive.

Of course, although the bloc has been persistent since 5 in the morning, it must be pointed out that this demonstration is peaceful and, according to several social leaders in the region, they only want, after multiple attempts, to finally be listened to take action on it.

“We are making a peaceful protest to ask the national government to look at this problem that we havethat these roads are turned to nothing and that we want them to be intervened, ”said Carlos Chanagá, leader of the protest, quoted by the regional press of the Santander department.

For now, the mayor of Bucaramanga, Juan Carlos Cárdenas, has not ruled on the matter, while the participants in this demonstration warn that they will not leave the middle of the road until the president, or the road authorities, as well as the National Government, give them some solution, or commit to improve the obvious bad state of the road. 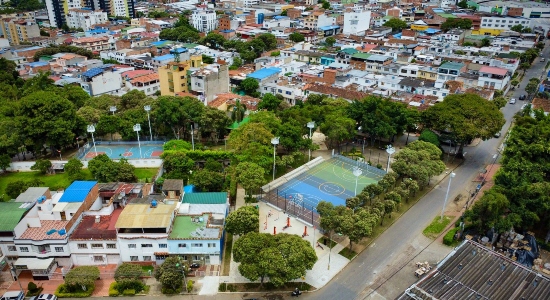 Overview of Bucaramanga, the city that has faced several strikes due to mobility and economic problems. Town hall.

On social networks, several drivers have published videos of the traffic congestion that is recorded on that stretch of road in Santander and they recommend other travelers to take alternate routes because there is no passage due to the blockade that dissatisfied Bumangueses are advancing.

The country records seven massacres in 2023, the most recent being perpetrated in Rionegro (Antioquia)

The victims were two men and a woman who were killed inside a house in the Juan Antonio Murillo neighborhood.

Despite the protesters demanding answers from the authorities, Mayor Cárdenas has made a series of pronouncements at a general level regarding the works that will be carried out in the city. However, he has not made direct reference to the road between the Santander capital and Rionegro.

“In this 2023 we will start up about 150 infrastructure works. Every day we are visiting the progress of each one and sharing with the communities in the different neighborhoods. We are paying off the historical pending that corruption left our city, ”said the burgomaster, in the last hours, through his Twitter account. 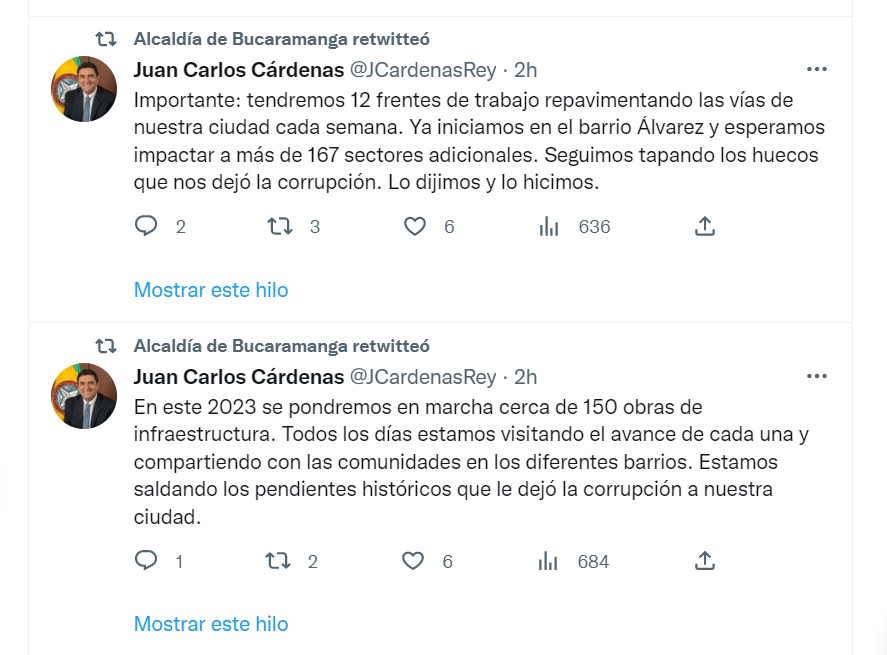 Mayor of Bucaramanga gives details of how he will work on the city’s road network. Twitter.

In addition, Cárdenas assured that, from the next few days, his administration hired “12 work fronts” that will be in charge, according to the president, of “repaving the roads of our city every week.” What’s more, he made it known where these tasks are being carried out and said that, contrary to what several of the dissatisfied citizens point out, he would be fulfilling what he promised in the campaign that allowed him to manage the destinies of one of the the most important cities of Colombia.

“We have already started in the Álvarez neighborhood and we hope to impact more than 167 additional sectors. We continue to cover the gaps that corruption left us. We said it and we did it”, said the mayor of Bucaramanga.

For now, the intervention of local and national authorities is expected in this section.

Taxi drivers stop: these are the possible meeting points in Bogotá

A series of demonstrations is planned at three TransMilenio portals and several exits from the city, among other hot spots.