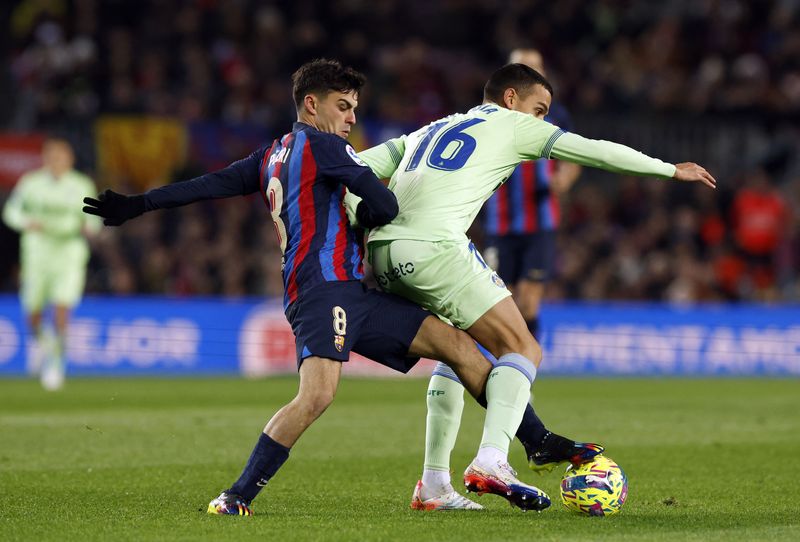 Jan 23 (Reuters) – Barcelona maintained their lead over Real Madrid in La Liga standings on Sunday after a first-half goal from Pedri gave them a 1-0 win over Getafe on Sunday.

Leaders Barça have 44 points, three more than their bitter rival Real Madrid, who beat Athletic Bilbao 2-0 on Sunday. Getafe is 16th, tied on 17 points with Celta Vigo and Real Valladolid (18th), just above the relegation zone thanks to their better goal difference.

Coach Xavi Hernández made several changes to his starting squad, resting key players Ronald Araújo and Frenkie de Jong ahead of their Copa del Rey quarter-final clash with Real Sociedad on Wednesday. Nor did it have the sanctioned Robert Lewandowski.

Pedri opened the scoring in the 34th minute, after receiving a pass from Raphinha and finishing off on an empty goal.

Possessing almost 70% of the ball, Barcelona dominated in all aspects of the game, but did not create many clear chances to extend their lead, with just four shots on target in the entire match.

After a first half in which Ansu Fati missed a couple of chances before Pedri’s goal, Barcelona returned from half-time at a slower pace and seemed content with their lead, while Getafe failed to create a serious threat.

“We haven’t been good. We’ve been thick,” coach Xavi told Movistar Plus. “When they put the low block it always costs.”