A new shaking rocked the streets of the Chilean city of Vichuquénwhen the earth began to move at 01:52 a.m. (local time) on Monday, November 28.

According to preliminary information from the National Seismological Center (CSN), the earthquake was 3.8 magnitude Y a depth of 30.0 kilometers.

The exact location of the epicenter It was located 40.0 kilometers west of the city, with coordinates -72.4 degrees longitude and -34.75 degrees latitude.

Remember that before any earthquake follow information only from official sources, avoid falling for rumors or false news. All the information on the country’s seismic activity can be consulted on the official CSN website at the following link.

after a tremor, check your house in search of possible damages, use your cell phone only in case of emergency, avoid saturating telephone linesdo not light matches or candles until make sure there is no gas leak. It is important to mention that after a major seismic activity, replicas can be filedso it is important to be vigilant.

An earthquake can happen at any time, so it is important to be prepared with the following measures: prepare a civil protection plan, organize evacuation drills, find safety zones at home, school or workplace and set up a emergency backpack.

What to do before, during and after an earthquake (Infobae/Jovani Pérez).

during an earthquake keep calm and find a safe place, stay away from objects that could fall, do not use the elevators, do not stay in the stairwell, or in a doorway.

if you are in a carpark and stay away from buildings, trees and poles; if you are on the coast, leave the beach and take refuge in high areas, before the possibility of a tsunami; Y if you are in a wheelchair and you cannot move to a safe place, stop the wheels and protect your head and neck with your arms.

What is the Ring of Fire

Chile is one of the countries with the most seismic activity in the worldthis is due to its geographical and geotectonic location, since it is within one of the areas with increased energy releasein the permanent convergence of the “Nazca Plate” and the “South American Plate”in the so-called subdiction zone.

Furthermore, the country is located in a region known as Pacific Ring or Ring of Fireconsidered the region with the largest number of volcanoes and tremors on the planet.

This area concentrates 75% of the volcanoes that exist in the world and includes more than 450 volcanic structures, in addition, it is where they occur 90% of the world’s seismic activity and 81% of the strongest earthquakes of the planet.

Only in Chile have occurred 50% of the tsunamis of which there are records in the worldaccording to information from the Department of Risk Management in Emergencies and Disasters. 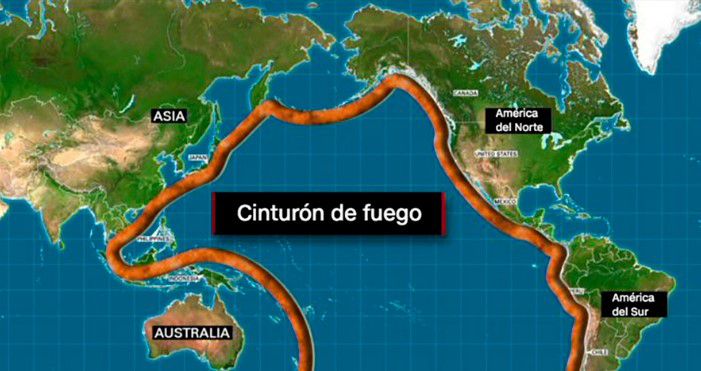 The Pacific Ring of Fire, the region that registers the most seismic and volcanic activity in the world (File).

Pacific Ring of Fire encompasses the entire Pacific coast, starting in Chile, passing through Central America, Mexico, the United States, touring the Aleutian Islands, later down the coasts of Russia, Japan, Taiwan and the Philippines, until reaching New Zealand.

Some volcanoes that are in the Pacific Ring of Fire and that have produced important eruptions with extensive damage on a global scale are: Krakatoa In Indonesia, Mount Fuji in Japan, mount st helen in the United States, the Bump in Mexico and the Nevado del Ruiz in Colombia, among others.

Every time a major tremor or eruption occurs in this area, the fear arises that the Pacific Ring of Fire is “activated” causing more natural disasters, however, this is not possiblesince each tremor or volcanic activity is mostly independent of each other, that is, they are not directly related.

The worst earthquake ever recorded

Since 1570, around a hundred strong earthquakes have occurred in Chile, of which almost thirty were of magnitude greater than 8.

According to the Department of Risk Management in Emergencies and Disasters, on average, it occurs an earthquake of magnitude above 8 every decade. These are some of the most relevant earthquakes recorded in the history of Chile.

The strongest earthquake in history

On the afternoon of May 22, 1960, a the largest earthquake on record, with magnitude 9.5, had as its epicenter the city of Traiguén, in the province of Malleco. However, it is known as the “Valdivia earthquake” because it was where there was more damage.

The seismic activity also caused a tsunami with waves up to 10 meters high that devastated a good part of the south of the country. The tsunami suffered beyond Chile, reaching Asia, in Japan, for example, it was hit by waves six meters high, leaving several deaths and significant damage in its wake.

The official death toll is not precise, just it is known that there were more than 2 thousand victims. 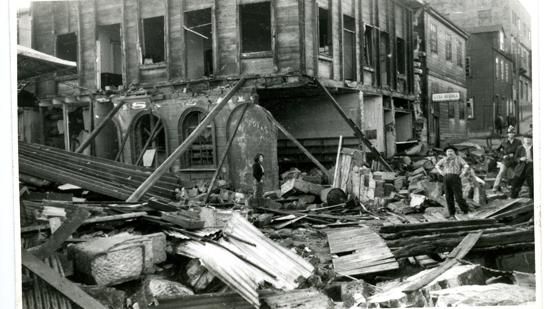 The strongest earthquake in history occurred in Chile (File).

The last great tremor that shook Chile was the one known as “27F” which occurred on February 27, 2010, the second strongest earthquake in its history.

With a magnitude 8.8the seismic activity had as its epicenter the coasts of the Maule region and surprised the population during dawn.

Just like in 1960, about half an hour after the earthquake, a tsunami hit the country, mainly in the Maule and Biobío regions. Outside of Chile, the tsunami reached Peru, Ecuador, Colombia and Costa Rica, without major damage.

because of the earthquake more than 500 people died and there were around fifty people missing. 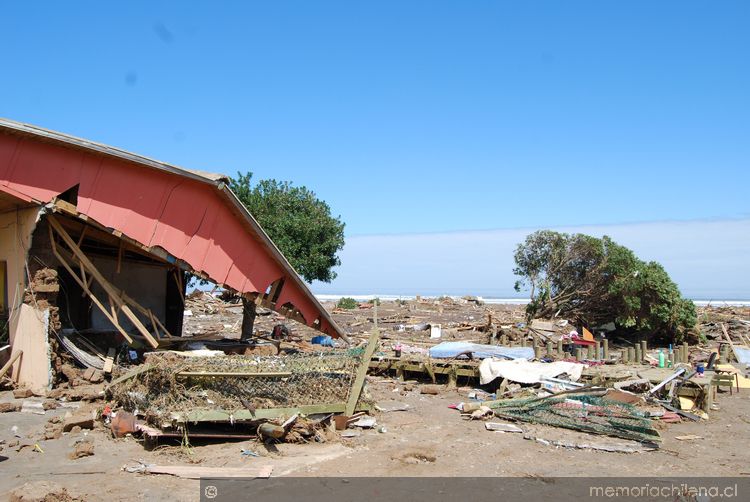 The most recent strong earthquake in Chile was 8.8 magnitude (Photographic and Digital Archive of the National Library of Chile).

On the night of January 24, 1939, a the deadliest earthquake in Chilean history. An 8.3 magnitude earthquake it was perceived from Valparaíso and up to Temuco, however, it was in Concepción and Chillán where the most damage was concentrated.

This telluric movement was called the Chillán earthquake because it was right there where it left the most destruction behind, just to say that more than half of its buildings collapsed.

As a result of the tremor, electricity, telephone and telegraph services were interrupted, there was no transportation, the railway station was left on the ground and the disaster caused a lack of food and water. 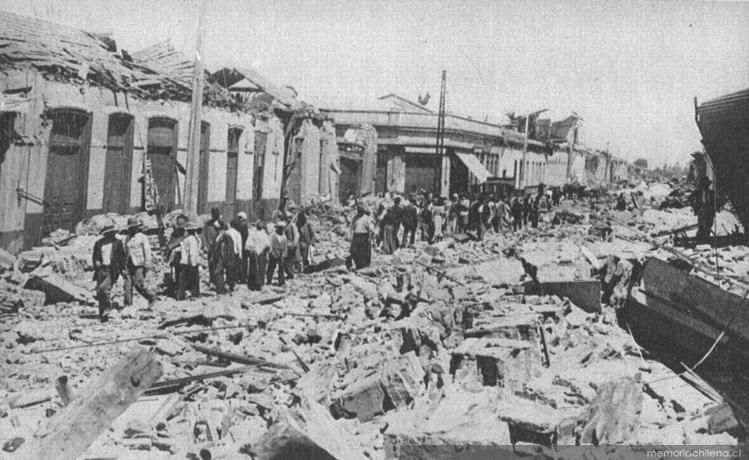 In 1939 the deadliest earthquake in Chile occurred (Photographic and Digital Archive of the National Library of Chile).

The 1939 Chillán earthquake is the tragedy that has claimed the most fatalities in Chile. The official death toll was 24,000, but some estimate that it was close to 30,000, although only 5,685 were identified.

In addition to the aforementioned tremors, there have been other important ones in the history of Chile.

For example, there have been two other telluric activities with magnitude greater than 8.5however, these have occurred more than 100 years ago -not counting the aforementioned earthquakes-, according to CSN records.

On the morning of July 8, 1730, it was perceived an 8.7-magnitude earthquake in Valparaíso that left around 3,000 dead. Another earthquake, this time of 8.8 of magnitude, it was felt in Arica the night of September 16, 1615, which surprisingly left no victims.

On the other hand, there two more earthquakes that left a balance of more than 2 thousand deaths: on the night of May 9, 1877, in Iquique, a a magnitude 8.5 earthquake; and that of the morning of February 8, 1570, which had a magnitude of 8.3.

Will associations be the collateral victims of the new law?

Big Brother: Ariel had to imitate Alfa in a game and the networks exploded

Turki Al-Sheikh hosts the stars of the Riyadh Season team

Will associations be the collateral victims of the new law?

Big Brother: Ariel had to imitate Alfa in a game and the networks exploded