Who said Christmas frescoes were cheesy? 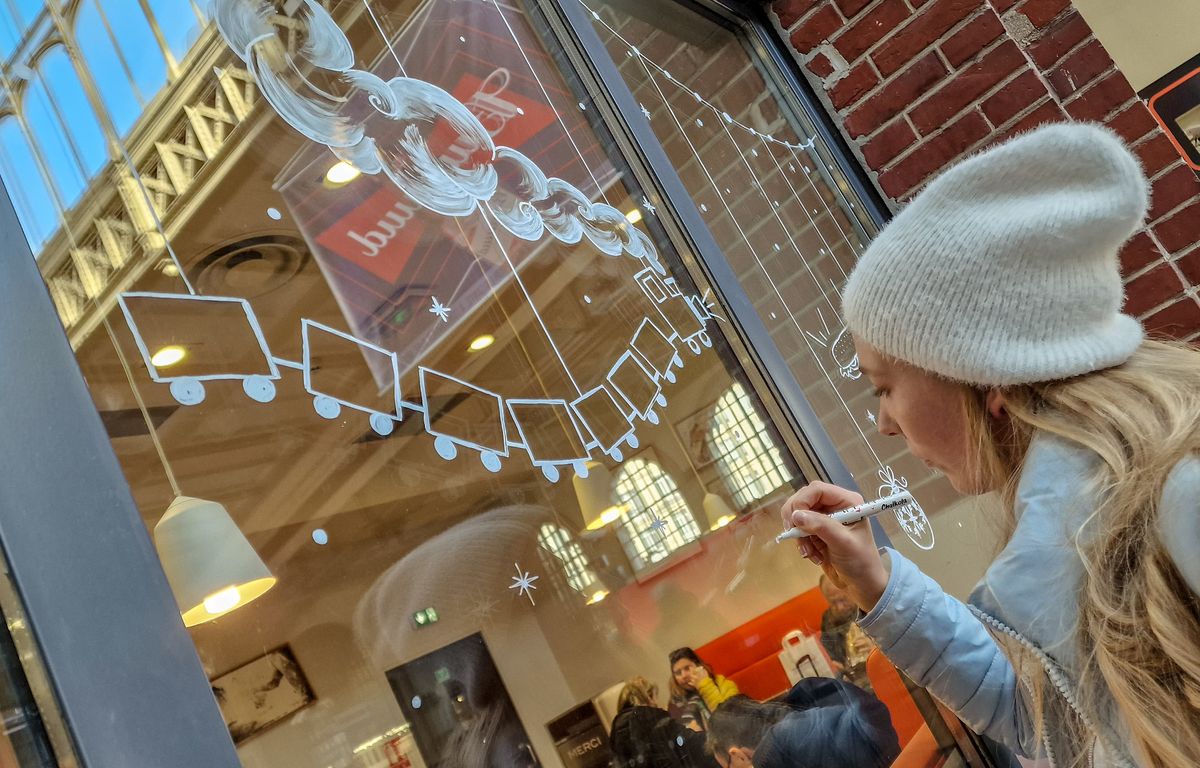 A month away from Christmas, Lille is already largely adorned with its festive tinsel. The big wheel is installed on the Place du General de Gaulle, the caterpillar sits in front of the Opera and the Christmas village has been welcoming visitors since last weekend. In the shops, it is also the commotion. And if it is necessary to recognize to the tradesmen a real will to put the package as regards decoration, one often remains perplexed vis-a-vis the lack of originality, even with the bad taste. And yet, a Christmas mural can be pretty and modern. And that’s the job by Ingrid Delebarrea young graphic designer from Lille.

She’s quite discreet, Ingrid, with her little hat and limited equipment, a few white Poscas that fit in a small bag that she carries over her shoulder. It’s also a safe bet that even the regulars of the Lille-Flandres station will not have seen her work. And we also bet that, in a hurry to catch their train or go to work, travelers will not have noticed the Christmas frescoes that now adorn the windows of the Kaiser bakery and the Subway sandwich shop. Because the talent of the young woman is not to attract the eye, but rather to capture the gaze: “I refuse no model, no request. If the customer wants a Santa Claus, I will make him a Santa Claus, but with my own sauce, refined, modern,” explains the 31-year-old graphic designer.

A work whose value is hard to recognize

We will therefore not see his signature under a large green, red and white pâté where reindeer with the heads of failed Bambi and fat elves like garden gnomes rub shoulders. No, Ingrid’s line is fine, often monochromatic and always stylish, even if she sometimes paints a little odd things: “I like to add patterns related to the activity of the sign”, she continues, showing us, on the Subway window, two sandwiches hitched instead of reindeer to Santa’s sleigh.

However, despite very affordable prices, between 150 and 450 euros, Ingrid is not overwhelmed by requests. In particular, it has to face competition from stickers purchased on Wish or the lack of budget from merchants. “Many block on the price, recognizes the young woman. They find it hard to understand that they are paying for know-how, hours of work, and not just a bit of Posca ink. »

Despite everything, Ingrid finds in this seasonal activity a welcome financial supplement. Because the heart of his profession as a graphic designer revolves around the creation of visual identities. “It’s a sector where outlets are often saturated and in which competition is fierce,” she slips. Lucid about the fact that it will take time for her to “build her nest”, Ingrid keeps her feet on the ground: “When you start out, you have to accept the hassle. But I intend to hang on even if it means resuming food jobs on the side. »