This is Maluma’s impressive dressing room

Maluma is one of the most trend-setting artists in the fashion world. Always updated and with the latest fashion, the singer constantly wears the best outfits.

That is why anyone could imagine that his dressing room was going to be one of the most desired by those who love fashion like him. On the afternoon of this Tuesday, he himself confirmed it through his Instagram Stories. 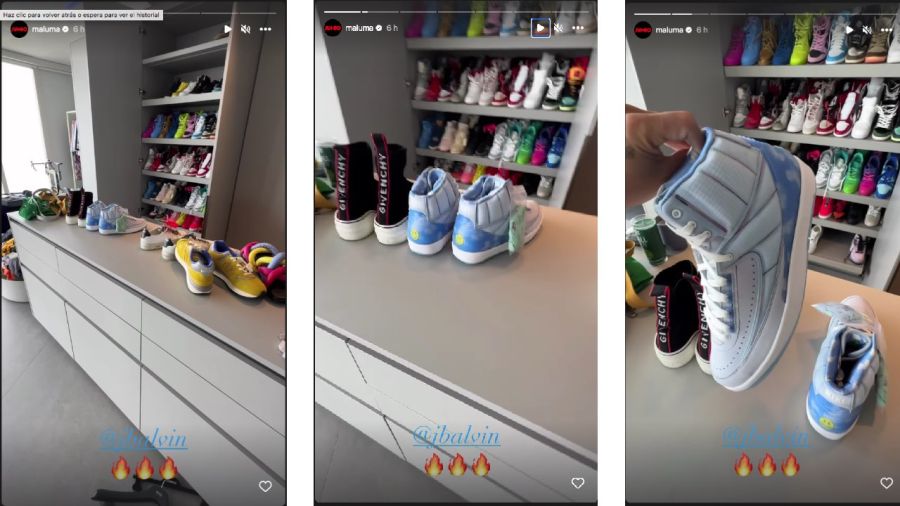 Maluma He posted a video showing his huge collection of sneakers. On a chest of drawers, there were at least six pairs of shoes between them some Givenchy boots and some Nike, your new purchase. These are little boots from the J Balvin collection for the pipe brand. For this reason, he also enraptured his colleague.

In the background you can see a cabinet with five shelves with approximately ten different slippers each. And, in the background, next to a window, there were clothes hanging, although you couldn’t make them out too much.

Thus, the artist shows once again that he is a great fashionista and knows how to set trends like few others.

The millionaire accessory that Maluma was showing off on social networks

Thanks to his successful songs, Maluma crossed the borders of his country, establishing himself as one of the best-known artists worldwide. Since then, the spoiled child of reggaeton he treasures successes and a great fortune with which he gives himself the most exclusive tastes. Months ago, the composer He shared photos on his social networks. wearing one of his latest whims.

Fame and popularity gave Maluma certain privileges that not everyone has: from private planes, impressive mansions and the best exclusive parties. With the idea of ​​not depriving himself of anything, Maluma has just given himself a very expensive gift and shared it on social networks this weekend.

Maluma was present at the Miami Formula 1 GP and from there he shared images on his account instagram. “Thanks to the team for the welcome. Incredible to be here, it seems like a dream” he wrote in his first post where he is seen showing off his latest purchase.

Maluma added another publication by sharing a video of the custom-made jewel. The piece the phrase is engraved “It’s cool to be great, but it’s bigger to be cool” of Hector Lavoeand was designed by the artist joseph lebansky. One of those involved in the creation is El Russo & Co.an international jewelry producer that has also created unique pieces for Bad Bunny Y Nicky Jam.

Maluma received a collar that has his dog, named Buddha, in a space suit. The piece is cast in gold and set with diamonds. Also, the dog has pink gems in its eyes.