Sky Cinema brings cinema to your home, the new Christmas campaign is underway 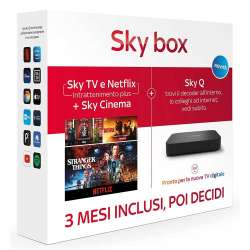 Even at Christmas, Sky brings cinema to your home. This is the promise of new Sky Cinema campaign, scheduled from today, Tuesday 22 November 2022. With Sky Cinema you can enjoy over 200 first visions a yearwith the best of Italian and international cinema and a vast range of genres, plus Sky Cinema subscribers can join a dedicated offer to access the entire catalog of Paramount+ at no extra cost on your subscription. And in the most magical time of the year the programming will be richer than ever.

The promo scene kicks off in a cabin, where – while white flakes descend from the sky – a family made up of a father, mother and two children is moving sofas and armchairs in a snow-covered garden. One immediately understands why: in the sky there is a giant screen on which great cinematic successes are projected. There is JURASSIC WORLD – DOMINATIONthe last extraordinary chapter of the saga produced by Steven Spielberg, from January 1, 2023 on Skythe great success of animated cinema MINIONS 2 – HOW GRU BECOMES DESPICABLE, arriving on Sky on 6 Januarythe blockbuster THE BATMANnew unmissable title dedicated to the Bat Man, with Robert Pattinson, already available on Sky. But not only: thanks Paramount+see the blockbuster movie of 2022, TOP GUN: MAVERICKwhich will be available on the service from Thursday 22 December. Produced by Paramount Pictures, Skydance and Jerry Bruckheimer Films, TOP GUN: MAVERICK sees in the cast Tom Cruise, Miles Teller, Jennifer Connelly, Jon Hamm, Glen Powell, Lewis Pullman, Charles Parnell, Bashir Salahuddin, Monica Barbaro, Jay Ellis, Danny Ramirez, Greg Tarzan Davis with Harris and Val Kilmer.

The scene widens and it turns out that the four are the inhabitants of a magical snowball, positioned in the living room of the Sky family. The giant screen is nothing but their TV, where thanks to Sky they are enjoying a great cinema Christmas.

And to better prepare for the festive period, from 1st to 31st December channel 301 will switch on the SKY CINEMA CHRISTMAS channel with a large collection of Christmas themed movies. However, it will not be the only thematic channel available: on the occasion of the TV premiere of FANTASTIC BEASTS – DUMBLEDORE’S SECRETS and JURASSIC WORLD – DOMINATION will also arrive SKY CINEMA HARRY POTTER, from Friday 23 to Saturday 31 December on Sky Cinema Familywith the films of the most beloved wizard of the big screen and JURASSIC WORLD SKY CINEMA, from Sunday 1 to Sunday 8 January on Sky Cinema Collectionwhere the six chapters of the saga will be available, as well the extended version of JURASSIC WORLD: DOMINATION.

The advertising campaign, conceived and created by Sky Creative Agency, will be declined on all means. Offline and digital strategy and media planning are by Wavemaker.

DISCOVER SKY GLASS, MUCH MORE THAN A TV.
FROM €11.90 PER MONTH WITH 3 MONTHS OF SKY TV AND NETFLIX INCLUDED
CLICK HERE AND BOOK A CALL WITHOUT COMMITMENT FOR MORE INFO!