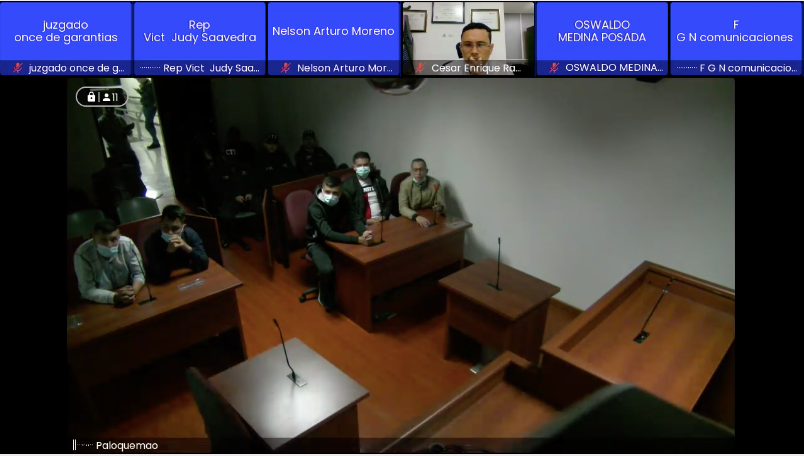 On Monday, November 21, the hearing to legalize the capture took place against the five uniformed officers who were linked to the investigation of the murder of Juan Pablo González, the alleged abuser of the minor Hilary Castro. During the proceeding, the Office of the Attorney General of the Nation maintained that the police officers had allowed this crime to be committed within the Immediate Reaction Unit (URI).

On November 6, a guarantee control judge issued an insurance measure for Juan Pablo González, accused of the abuse suffered by Hilary Castro at the La Castellana Transmilenio station. In this way, the subject arrived at the URI of Puente Aranda, where they had prepared a “welcome”.

Magazine Week managed to establish contact with a witness in the case, who assured that the prison gang “The Feathers” was in charge of inflicting the beating. A fact that, for the Prosecutor’s Office, could have been avoided with the intervention of the custodians of the place. However, they would not have done anything to safeguard the life of the prisoner.

“The uniformed policemen were able to prevent those deprived of their liberty from injuring, torturing and taking the life of Juan Pablo, but they did not want to do so.. They did not use their voice, nor their force of command, they did not cause an alert to call for the presence of more force to prevent the act, they did not oppose, they did not issue an arrest warrant, on the contrary, they were permissive,” said the Prosecutor’s Office.

It should be noted that one of the defense lawyers asked not to declare the capture of four of the uniformed men legal, since it considers that this case should be assumed by the Military Criminal Justice, given that the events occurred in the midst of police functions. Request that the judge 11 of control of guarantees denied.

The five police officers, who had been provisionally suspended on November 10, They did not accept the charges brought by the prosecution.

This man was accused of the crimes of violent carnal access and theft aggravated by the alleged abuse against the minor in a Transmilenio station, for which an insurance measure was ordered. Later, he was transferred to the URI of Puente Aranda, specifically, according to the Prosecutor’s Office, to cell number four on the second floor. Already in the place, apparently, the perpetrators of the crime would have shaved his hair and then beat him for almost half an hour.

“They shaved his hair, they took him to the bathroom, they forced him to bathe and they beat him for 27 continuous minutes with fists and kicks, injuring him until he lost his life”, indicated the Prosecutor’s Office.

Throughout this time, they would have caused him more than 50 injuries, bruises, ecchymosis and fractures. Furthermore, while they were beating him, they allegedly urinated on him and forced him to drink his own urine.

According to the report of the Prosecutor’s Office, these acts would have been committed by the prisoners of the place as punishment for being a rapist. Finally, after the beating, González suffered a polytraumatism with severe thoracic trauma, which caused a acute respiratory failure, the final cause of his death.