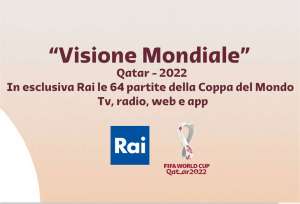 The reasons for cheering – We know, there isn’t a particular reason to become a fan of this or that team, and it applies, above all, to club teams. Because each of us obviously has the Azzurri in our hearts. However, when, unfortunately, it happens that Italy is not at the World Cup, you have to necessarily find a national team to follow more warmly. And to do so, we will offer you a special tool: “Ten reasons for…”, or the reasons that will make you prefer France to Spain, Germany to England or Argentina to Brazil. And if in the end, perhaps, you choose to cheer for Hakimi’s Morocco or Davies’ Canada, that’s fine too…

Once upon a time on the 10th – There is an element, in the variegated iconography of football, which symbolizes it more than any other: it is the number 10. Those who wear it, or have carried it on their shoulders, have often, almost always, passed through history through the front door. For this reason, just starting from number 10, RaiPlay will create an original program that will lead the web audience to the Qatari World Cup through past World Cups. A project that will develop into the creation of ten clips lasting 3 minutes each, made entirely with archive images present within the Teche Rai. Each clip will consist of ten episodes – in fact – linked to the history of the world championships: in short, it will be a sort of Top Ten of the events that more than others have marked the tournament (the ten goals, the ten saves, the ten most curious, etc…). A product that will be published exclusively on RaiPlay.

The Rai News World Cup – For each of the 29 days during which the 2022 World Cup will unfold, Rai viewers, tuning into Digital Terrestrial channel 48 of Rai News24or by connecting to the site rainews.it, will have the opportunity to find the HL of the matches, the interviews, the exclusive content of an offer that has never been so rich in terms of the World Cup. Not only that: every day, in traditional appointments with Sports24scheduled at 12.30 and 19.30, a space of fifteen minutes will be dedicated exclusively to the World Cup, with images, interviews and reports from Qatar, enriched by live connections with the Rai Sport studio set up inside the IBC in Doha , the International Broadcasting Center which, between 20 November and 18 December, will be the planetary citadel of information in a football key.

10.15 pm – RAIUNO HD: [disponibile su Rai 4K can 101 DTT – 210 Tivùsat]
Heading: The Club of the World Championships (live)
from the TV3 studio – Milan
In the studio: Alessandra De Stefano, Sara Simeoni, Jury Chechi, Diego Antonelli
The Circolo dei Mondiali recounts the event in Qatar using football as a global lens to interpret contemporary society. Sport, information and entertainment come together for a new story of these very particular world championships, played for the first time in autumn. At the table with the presenter also the fixed cast made up of Sara Simeoni, Jury Chechi and Diego Antonelli. In each episode there is also a great surprise guest, the protagonist of the discussions and “challenges” in the studio. From 11.30 pm the program continues exclusively on RaiPlay.

11.30 pm – RAIUNO HD:
Category: Bobo TV – Special Qatar
With: Christian Vieri, Antonio Cassano, Daniele Adani, Nicola Ventola
Deployed in a typical formation – Vieri, Adani, Cassano and Ventola – Bobo TV tells the World Cup in its own way: no longer only on Twitch but also on Rai1 and RaiPlay through 22 pills of approximately 4 minutes, broadcast at the end of the matches scheduled on Rai channels, including the final. A direct Italy/Qatar line dedicated to football entertainment.