Sky Sport doesn’t stop during the World Cup, with specials and live events 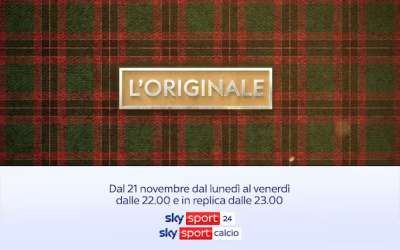 From the November 20th to December 18th, on Sky and in streaming on NOW, alongside the schedule of news and insights dedicated to the World Cup in Qatar, a special schedule with columns and original productions, in addition to events of the “House of Sport”.

Every day at second night, from Monday to Friday, it returns in a new guise “The Original” with Alessandro Bonan and Gianluca Di Marzio; Saturday, space for “House of Sports Night”. Sunday it’s up to Fabio Caressa and his “Sky Football Club”, also confirmed during the World Cup with special guests.

Within the headings, space for market and at news on Serie A teams engaged in training camps in preparation for the resumption of the season, thanks to the contributions of Sky Sport correspondents, without forgetting the rich coverage of Sky dedicated to the championships of Serie B and Serie C, who continue their journey. In Sky’s Casa dello Sport there is also tennis with Davis Cup Finals in Malaga (November 22-27), the big international basketball with Euroleague and NBAthe championship Serie A1 women’s volleyball and the novelty of World Championships in short course swimmingscheduled for December 13-18 in Melbourne.

Every week, until Christmas, don’t miss the appointment with the new original productions of Sky Sport. Starting from PANATTA & BERTOLUCCI, THE DOUBLE LIVE (from Friday 11/25), exclusive document of the live show at the Adriano Panatta Racquet Club of the legendary 1976 Davis couple. From tennis to football, LIVES – THE ART OF THE POSSIBLE: Roberto Baggio (from 23/11) with the exclusive interview of the director of Sky TG24 Giuseppe De Bellis with Roberto Baggio, on and off the pitch. In December, don’t miss it BUFFA & GRAZIANI: World Champions (from Friday 2/12), to close the stories and specials dedicated to Italy’s victory at the 1982 Mundial, an amusing chat between the storyteller and one of the protagonists of that triumph, recorded at Festivaletteratura in Mantua. It’s still, FOOTBALL vs CLIMATE CHANGE – The opponent to beat (from Friday 9/12), Italian version of the documentary by Sky Sports UK dedicated to climate change and what the world of football can do to fight it.

Then continue with GOLDEN BOYS – Italy of Volleyball World Champion (from Friday 16/12), a special instant doc dedicated to the world champion Italian men’s volleyball team. Under the tree, STORIES OF MATTEO MARANI – Mennea 1980, Petrograd (from Friday 23/12) dedicated to Pietro Mennea’s victory in the 200 meters at the 1980 Moscow Olympics, with a tribute from Filippo Tortu, DI CANIO PREMIER SPECIAL – Christmas Edition (from 25/12) another episode of the series, in addition to the one just released and available on demand, dedicated to Bryan Clough’s Nottingham, to celebrate 30 years of the Premier League, retracing moments and symbolic characters, 23 DAYS: The miracle of Sofia Goggia (from Friday 30/12), an original production by Sky Sport dedicated to the unforgettable Olympic feat of the blue skier in Beijing: the metaphor of life and the incomparable mentality of a queen of world sport.

Plus, they’re already available on demand THE SUNDAY MAN – Roger Federer. I saw a king (available on demand), a portrait of His Majesty Roger Federer in the words of Giorgio Porrà, and JANNIK, BEYOND TENNIS. Sinner talks about himself, an exclusive interview with the young Italian talent conducted by the director of Sky Sport Federico Ferri. News and insights also on Sky Sport24, skysport.it and on the Sky Sport social accounts.