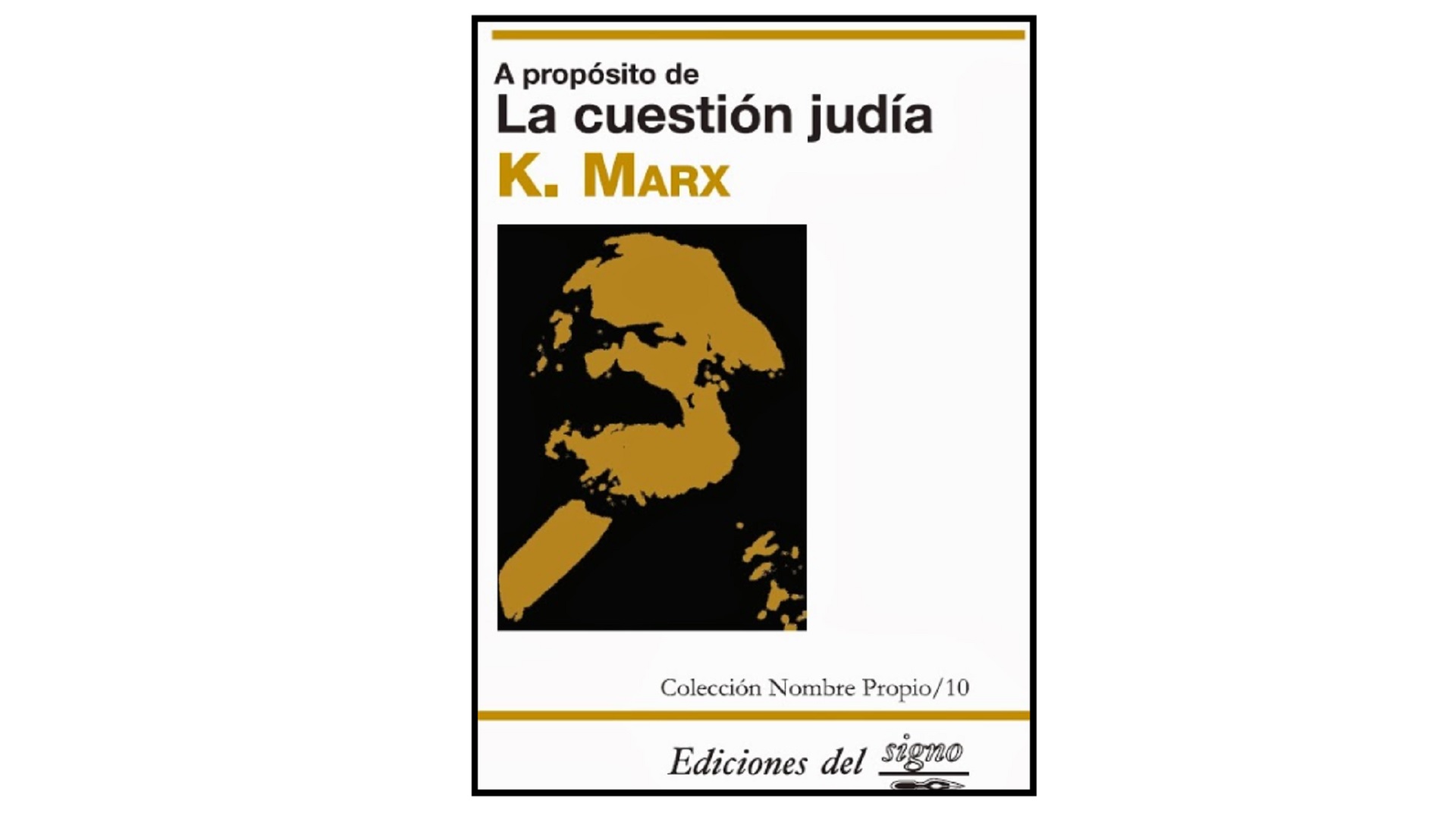 The Jewish Question, by Karl Marx

As is well known, Marx was born with the name of Harchel Levison of Rabbi Marx Mordechal ben Samuel Halevi who abandoned his religion to be able to make better use of his law firm during the Prussian regime.

in 1843 Marx wrote the jewish question where he emphasizes that “We recognize, then, in Judaism an antisocial element present of a general nature” and asks and answers “What is the secular cult practiced by the Jewish people? Usury What is your secular god? The money” and “Bourgeois society constantly engenders the Jew in its own womb.” Also, as is well known on a more general level, Marx insisted that “religion is the opium of the people.”

I have referred to this before, which I partly comment on below, but in this context it cannot be avoided. In the third chapter of communist manifesto written in 1848 by Marx and Engels, the central aspect of his thesis is consigned “the communists can undoubtedly summarize their entire theory in this single expression: abolition of private property”. If there is no private property, there are no prices, ergo, there is no possibility of accounting, project evaluation or economic calculation. Therefore, there are no guidelines to efficiently allocate the always scarce resources and, consequently, it is not possible to know to what degree capital is consumed. And it should be emphasized that the damage occurs to the extent that the property is affected without the need to abolish it.

To this crucial swarm, impossible to resolve within the system, is added the historicism inherent to Marxism, contradictory indeed, since if things are inexorable there would be no need to help them with revolutions of any kind. His dialectical materialism, which maintains that all ideas derive from purely material structures in Hegelian processes of thesis, antithesis and synthesis, is also contradictory since, then, strictly speaking, it does not make sense to elaborate the ideas supported by Marxism.

This Hegelian dialectic applied to the relations of production intends to support the process of class struggle. In this context, Marx founded his theory of polylogism, that is, that the bourgeois class has a different logical structure from that of the proletarian class, although he never explained what the different logical connections consisted of or how they were modified when a proletarian won the lottery. nor when a bourgeois is ruined and what does the logical structure of a son of a proletarian and a bourgeois consist of.

The contradictions are even greater if Marx’s three most famous forecasts are taken. In the first place that the communist revolution would originate in the nucleus of the countries with the greatest capitalist development and, instead, it took place in tsarist Russia. Secondly, that the communist revolutions would appear in the working-class families when they all arose within the bosom of bourgeois-intellectuals. Lastly, he predicted that ownership would be increasingly concentrated in a few hands and only joint-stock companies produced a colossal dispersion of ownership, as in a broader context today authors such as Anthony DeJasay when they criticize Thomas Piketty.

In this very tight journalistic summary, it is worth mentioning that Marx’s mistaken vision regarding the labor theory of value gave rise to the notion of capital gain. That conception held that work generates value without realizing that things are produced (worked on) because value is assigned to them and they have no value due to the mere fact of accumulating efforts (even though they wanted to hide the fiasco with that expression empty of “socially necessary work”).

In the first book that Marx and Engels wrote together published in 1845, The Holy Family. Criticism of Critical Criticism (this was not a typo, it is the title) allude to studies carried out by Bruno Bauer and his brothers Edgar and Egbert. The work contains many edges but the one I am now highlighting is the materialism of Marx (physical determinism according to Popper’s terminology) already evidenced in his doctoral thesis on Democritus.

Lenin – the shrewdest of his disciples – never believed that the so-called proletariat could lead, much less govern a revolution (or under any circumstances). That is why he wrote what appears in the fifth volume of his complete works in the sense that “it is not the proletariat but the bourgeois intelligentsia: contemporary socialism has been born in the heads of individual members of this class.” This is also why Paul Johnson in his modern world history stresses that “Lenin never visited a factory or set foot on a farm.”

The notion of the Marxists on the division of labor is truly curious: Marx and Engels consign in german ideology that “in a communist society, in which no one has an exclusive sphere of activity but everyone can train in any sector they want, society regulates general production and therefore it becomes possible to do one thing today and another tomorrow, hunt in the morning, fish in the afternoon, raise cattle in the evening, criticize after dinner, as I please, without ever becoming a hunter, fisherman, herder or critic.

Despite this peculiar view, violence is inextricably linked to marxism. This is why in the above communist manifesto declares that “they can only achieve the objectives by destroying the old social order by violence.” This is why Marx in Class struggles in France in 1850 and the following year in 18 Brumaire emphatically condemns the proposals to establish voluntary socialisms as islets in the context of an open society. That is why Engles also condemns those who consider systematic violence inconvenient, as occurred, for example, in the case of Eugen Dühring for what Engels wrote The Anti-Dühring where he underlines the “high moral and spiritual flight” of violence.

Antisemitism or Judeophobia is based on false notions about the idea of ​​”race”. Spencer Wells, the Stanford and Oxford molecular biologist, has written in The Journal of Man. A Genetic Odyssey that “the term race has no meaning”. It really is a stereotype. As Wells explains in his most recent book, we all come from africa and the physical features were formed through the generations are according to the geographical and climatic characteristics in which people have resided. For this reason, as I have said on another occasion, it does not make sense to refer to North American blacks as “Afro-Americans”, since that does not distinguish them from the rest of North American mortals, for the case that the one who writes these lines is Afro-Argentine.

Thomas Sowell points out that in the Nazi death camps the victims were shaved and tattooed to be able to differentiate them from their victimizers. This despite all the classificatory gibberish of Hitler and his hitmen, who ultimately embraced the Marxist approach. Only, instead of following the class polylogism, Nazism was racist, but with the same folly in that they could never show what the differences were between the logic of an “Aryan” and that of a “Semite.” Darwin and Dobzhansky -the father of modern genetics- argue that there are as many classifications of this ambiguous and contradictory concept of “race” as there are classifiers. On the other hand, in the case of the judeophobia, despite the inconsistencies of the idea of ​​race, this same notion is confused with religion since that is what it is about and nothing else. The Catholic priest Edward Flannery exhibits in his two-volume work entitled Twenty three centuries of antisemitism the tremendous tortures that high representatives of the Catholic Church have inflicted on the Jews, among many other cruelties, as Father Flannery points out, prohibited them from working in ordinary activities, which limited them to dealing with the money loan, but while they were cataloged of “usurers” used their money to build cathedrals. We must enthusiastically celebrate the ecumenical spirit and John Paul II’s requests for forgiveness on behalf of the Church, among which is, first of all, the one addressed to the Jews for the physical and moral mistreatment received over a long period of time.

Paul Johnson in his jewish history points out that “Certainly, in Europe the Jews played an important role in the dark age […] In many respects, the Jews were the only real link between the cities of Roman antiquity and the nascent urban communes of the early Middle Ages.

All the achievements of many Jews in the most diverse spheres have produced and continue to produce envy and resentment among self-conscious and devious subjects. Perhaps the first manifestations of anti-Semitism or, better, Judeophobia, in the ranks of Christianity were the pathetic sermons of Saint John Chrysostom in the first century published under the title of Adversus Judaeos where he says that the Jews “are wild beasts” who are “the abode of the devil” and that “synagogues are deposits of evil” for whom “there is no indulgence or forgiveness” and then the Council of Elvira in 306 forbade Christians to marry Jews and other barrabasadas.

Over time, the explicit support of Church authorities for legislation restricting the rights of Jews including the right to property and in many cases forced baptisms, confiscations, excise taxes, clothing that stigmatized, and in places allowed to Jews, a derogatory mark was sometimes placed on the door. Pope Eugene III established that Jews were obliged to forgive Christian debts. Innocent III authorized forced conversions and the Council of Basel allowed discrimination in ghettos and other horrors that over time consolidated and sharpened until the aforementioned requests for pardon from John Paul II marked a point of clear reversal and severe condemnation of anti-Semitism. and they promulgated a sincere and very valuable and affectionate ecumenism in relation to the three monotheistic religions and respect for all. It goes without saying that this denigrating attitude does not reach all of Christianity, far from it there have always been sensible and civilized people who were outraged and outraged by the unacceptable treatment of Jews, both priests and laymen.

In any case, in addition to the Commandments of not stealing and not coveting other people’s goods Jewish tradition is a hymn to freedom and to the rights of the people, in addition to the severe warnings about the monopoly of force that we call government (at that time king) especially in Samuel II: 8. In other words, Marxism and all other forms of totalitarianism are at odds with the Jewish tradition, the opposite can be reversed if one follows Isaiah 1:9 in terms of the essential educational tasks to rebuild values, always in charge of a tiny group (in the English version equivalent to the beautiful expression of remnant). Linked to this idea of ​​freedom in connection with the Jewish people is that the musical curtain of what were the television program that he hosted in Buenos Aires and the radio program in Colonia -respectively called Contracorriente and Pensando aloud- was “Va Pensiero” from Nabucco, production of the great Verdi.