big ball of Eva Longoria who thinks he is talking to Nikos Aliagas and is cropped by an annoyed Camille Combal!

Presented this year exceptionally by Camille Combal, who replaces at short notice the unbeatable Nikos Aliagas who was injured during the last Star Academy bonus, last Saturday November 12, this 24th edition crowns some 17 categories for the first time! And, among them, the best French-speaking group or duo. For the occasion, Eva Longoria was chosen to announce the artists in the running: 47Ter, Bigflo & Oli, Indochine, Louise Attaque and Terrenoire. The other categories that will oppose these talented celebrities are also the “Francophone Song of the Year”, “Francophone Clip of the Year” or even “Francophone Collaboration of the Year”. But before all that, the beautiful actress who appears on the screen in duplex wishes to greet her host… and the blunder is immediate “Good evening Nikos!”. Annoyed, Camille Combal surely thinks she got the wrong WhatsApp group! He who was so happy to present this evening, surrounded by stars, instead of being at home “under a plaid”! 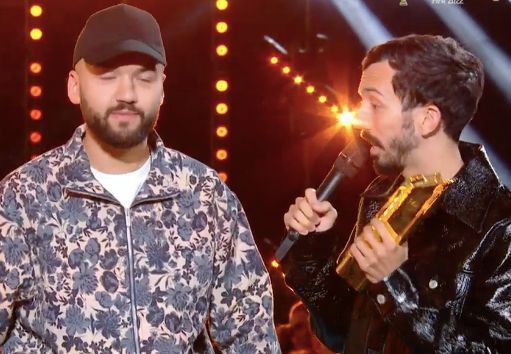 It was finally Big Flo & Oli who were named winner of the trophy by the ex-Mrs. Parker… Themselves who “suffered” a bad prank from Julien Doré, or rather his clone Julien Crâmé, who sent to sing at the bar of the “Banana Blue”… before arriving on the stage of the Palais des Festival de Cannes. In front of a large audience that the two brothers, very happy with their victory, warmly thanked.